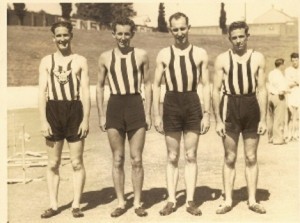 Asics Wests, is one of the powerhouse clubs in NSW and Australian athletics sporting history, having bolstered many of the country’s leading athletes and contributed some of the nation’s finest sporting administrators and officials.

On 8 July 1904, at a meeting in Burwood, the club was formed and a committee elected. The club’s track was St Luke’s Field in Concord. In 1912 the club moved to Pratten Park in Ashfield and this remained the home for the club until 1932. The venue also hosted the NSW open championships during this period. In 1932 the club’s home was returned to Concord Oval (St Luke’s Field), a 352 yard track, where they had the luxury of electric lights for winter mid-week training. However during the second World War, use of electronic floodlighting was restricted by the Federal Government where they had ‘brown-out’ regulations. In 1945 a new 400 yard track was prepared in an oval shape, with 40 yard straights and 160 yard bends. At the start of the 1977/78 season, Western Suburbs Rugby Union Club took over control of Concord Oval from the Concord Council and unfortunately they were not prepared to maintain the athletic markings as the council had done previously.  This forced the club into discussions with Auburn Municipal Council about a venue for their club. This led to the opening or a club house and use of Wyatt Park Auburn in April 1978. The venue remains the home of the club, although in recent years the club house has been torn down.

In 1954 a very popular competition was launched by the club, the Western Suburbs Schoolboys carnival. The inaugural event attracted 402 athletes from 27 schools. It became a regular fixture on the calendar for juniors.

Another example of the club being ahead of its time was in 1978 when they obtained sponsorship from Adidas sportswear, becoming the first club in Australia to obtain a sponsor.  The sponsorships continued with Capitol Motors in 1980, Hastings Deerings in 1984 and Fury Ford in 1986. In 1985 their uniform and major sponsor also changed from Adidas to Asics Tiger. This sponsorship with Asics Oceania, remains in place 30 years later. A major part of the Asics sponsorship was a popular annual New Year’s day carnival.

In addition to the athletes, the contribution by West’s administrators and officials to athletics in NSW and Australia is outstanding. One person particularly stands alone, Arthur Hodsdon, who passed away in 1982. He gave over 50 years service to the club. His capacity for detail and volume of work was amazing. He joined the club in 1924 as a distance runner. For most of his 50 years he was the treasurer and registrar and secretary during the second world War. He was soon on various Athletics NSW committees and made a life member in 1949. Incredibly he was the Secretary and Treasurer of Athletics Australia from 1947 to 1974 – 27 years. He was one of the rare people to hold both key positions. Some of his other achievements included the formulating of the Pacific Conference Games and IAAF Oceania region. He was made a life member of Athletics Australia in 1966 and awarded an MBE in 1965. He was affectionally known as ‘Mr Athletics.”

The program for the Golden Jubilee Dinner for the club, held in 1954, show how things have changed in the last 60 years. The night included the following with toasts to: The Queen, ‘lest we forget’ / the club pioneers / the Amateur Athletics Union of Australia and Amateur Athletic Association of NSW

Also on the program was the showing of a film, ‘The 1953 Redex Trial’ and singing of Auld Lang Syne.

The history of the club has been compiled by Merv Lee-Archer and two other long term members of the club, Phil Donelan and Michael Doggett. Phil Donelan was first known as a distance runner in the club in the mid-60s going on the compete in race walking in later years. A short time after joining the club he was on the committee and became one of the hardest working club members. He was for many years an Athletics NSW official and can be regarded as one of the club’s great stalwarts.

Michael Doggett has been a leading club distance runner since the ‘90s.  By 2004 he had entered masters competition and was very competitive. He was also club captain and was one of the organisers of the 100th club dinner in 2004. He is one of the few club members to be twice awarded the club’s President award for a member displaying striking qualities of leadership, sportsmanship, loyalty and serve to the club.

The sport of athletics in Australia would be much poorer without the significant contribution of the many athletes, coaches, officials and administrators of the Western Suburbs Athletics Club.

The 110th club anniversary celebration and launch of the book will be held next Sunday in Lidcombe. The 420+ page book is recommended to any person interested in the history of Athletics in NSW and Australia.